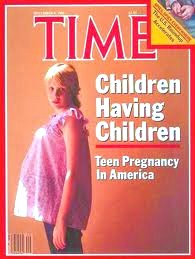 Teen shows have always been a popular form of entertainment for teen girls and boys alike. However, as the years go on, show creators continue to push the boundaries of sex demonstrating teens engaging in all forms of sexual contact. Teenage pregnancy and the media is portrayed in many forms including television shows and movies showing  teen pregnancy including fictional dramas to reality shows like MTV’s 16 and Pregnant and Teen Mom. While these shows may attempt to focus on the realities of teenage pregnancy and the media, teen pregnancy rates throughout the United States continue to rise.

Teenage pregnancy and the media:

As reported by Time Magazine, the Rand Corp. did a study to determine the effect of teenage pregnancy and the media to find if teens exposed to sexual conduct on TV and other media sources affect teen pregnancy rates. The results of the study found that teens exposed to sexual content on TV and in movies, are twice as likely as teens watching less of the same material to become pregnant before they reach age 20. The study revealed that teen movies glorifying sex as well as teen pregnancy reinforces the idea that teens should become sexually active early in their teen years to “keep up with what is normal,” or what they see on TV. Teens get the impression that if everyone on TV is having teen sex, then most of their peers must be having sex. However, this is not always the case. Yet the perception put forth by the media is that it is normal for all teens to have sex. However, many teens reported in the study they wish to wait to have sex for marriage or until they are older or “in love.”

Other effects of teenage pregnancy and the media:

However, in spite of these teenage pregnancy statistics, a report by the National Campaign to Prevent Teen and Unplanned pregnancy, revealed that in a recent study about 93 percent of teens who watched the show 16 and Pregnant found they were surprised about how difficult being a young teen mom or pregnant teen really is. About 83 percent of the teens surveyed said they learned new facts about teenage pregnancy from the discussion of the episodes. It is unclear whether the information received from reality shows about teen pregnancy are having any direct effect on the number of teens getting pregnant each year. However, with pregnancy rates on the rise in America, shows like 16 and Pregnant do not appear to be having any positive effects on teen pregnancy.

The future of teen pregnancy:

These studies leave both parents and teens wondering what the effect really is on teenage pregnancy and the media. Overall, many researchers have found that teenage pregnancy and the media, as well as sex and the media are not likely to be trends going away anytime soon. Ratings for reality as well as fictional shows about teenage pregnancy are high resulting in spin off shows like Teen Mom, which portrays young teenage mothers. Some have speculated that with shows like Teen Mom, teens are seeing the side of teenage mothers that is considered “glorifying.”  Instead, it is important for parents and teens to teach and learn about the responsibilities of safe sex and the likelihood of getting pregnant without proper use of contraception or birth control. Because the majority of public schools throughout the United States only teach abstinence-only sex education, it is a good idea for parents to teach their teens about the proper way to use condoms, take birth control and practice safe sex. While abstinence-only education is helpful in teaching teens that the only sure fire way to prevent pregnancy is through avoidance of sexual intercourse, there are still teens who will have sex anyway. Teen pregnancy statistics indicate that it is important for all teens to know and understand the roles of safe sex whether they are actively having sex or not. Parents should not rely on teenage pregnancy and the media to inform their child about safe sex and pregnancy prevention.