According to teenage pregnancy and miscarriage statistics, about 900,000 teen girls get pregnant each year in the United States. Out of this number, about 15 percent of these teens miscarry the pregnancy. Because of the type of nutrients that many teens are lacking and the amount of developing and growth they still have to go, some teens really struggle to maintain a healthy pregnancy, which is why so many teens pregnancies result in a miscarriage. Other effects of teen pregnancy include teen mothers that are more likely to deliver the baby prematurely and have lower birth weight babies with other risks of infant death, mental and physical handicaps, mental illness, blindness, deafness and other permanent problems.  Because it takes a while for teens to know they are pregnant and they might engage in risky behaviors in the first few weeks of pregnancy. Teens who engage in smoking, underage drinking and other risky behaviors like unprotected sex (contracting sexually transmitted diseases) and even in drug use, are more likely to miscarry the baby early on in the pregnancy because the teen likely didn’t know she was pregnant.

Because teens might engage in risky behaviors early in pregnancy, they are more likely to miscarry the baby because the nutrients are not enough to sustain a healthy pregnancy and result in a healthy baby. There are also lots of pregnancies that end in miscarriage for unknown reasons for even mothers that are older than their teen years. Unfortunately many miscarriages can occur for unknown genetic or chromosomal reasons. Many teens might have irregular periods and menstrual cycles because they are so new to entering their fertile age as teens, that they don’t know when they can expect their next period. The teens may go weeks without having a period simply because they are usually irregular anyway. By the time the teen realizes it has been weeks or even months since their missed period, they are already several weeks or months along in the pregnancy.

If the pregnancy ends within the first 20 weeks of pregnancy, this is considered to be a spontaneous abortion (miscarriage). Miscarriage is often the most common type of pregnancy loss. However, most miscarriages occur within the first 12 weeks of pregnancy (the first trimester). There are certain occasions of a miscarriage that can present problems and concerns to the mother’s health as well, especially for teen girls who are not fully developed. That is why it is important to be aware of the warning signs of a miscarriage, so you can consult your heath care provider as soon as possible to make sure your miscarriage does not present any dangers to you as the mother including excessive bleeding, hemorrhaging, losing consciousness or having a blog clot.

Certain types of miscarriage like having a blighted ovum (anembryonic pregnancy), ectopic pregnancy and a molar pregnancy can present health risks to the mother when the mother goes through the miscarriage. The ectopic pregnancy if not treated right away, can result in a ruptured tube, which is because the egg implants and fertilizes in the fallopian tube instead of the uterus. When this occurs, it can cause the tube to rupture and excessive internal bleeding that can kill the mother.

Being aware of these signs to prevent a dangerous miscarriage is important for those teens and pregnant women that are pregnant:

Women with miscarriages are often reviewed and examined by a doctor with an ultra sound and blood tests to ensure the fetal tissue has passed. If it hasn’t, a dilation and curettage (D&C) is performed to remove the rest of the tissue. Women are often monitored afterward to ensure there is not excessive bleeding. If the bleeding does occur on an excessive level, it is important to talk to your doctor right away. 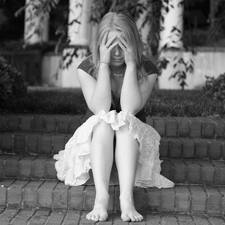