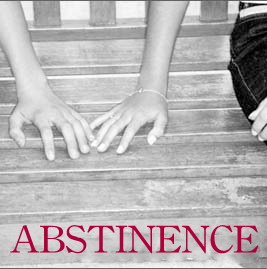 The subject of teen abstinence has been a debated issue for years. Teen abstinence is the primary method of sex education currently taught in public schools. Many believe it is encouraging teen abstinence, while others debate that teens will have sex anyway.

According to new teen sex statistics released by the Centers for Disease Control, more teens are saying no to sex and sex-related activities. Many are attributing the growing number of teens practicing abstinence to the fact that it is being taught in more and more schools across the country. Proponents of abstinence-only education are taking credit for this change in numbers. According to the recent teen abstinence statistics about 29 percent of women have not had any form of sex or sexual contact. About 27 percent of teen males in the same age group have had not any form of sex. Only 7 percent of teen girls have had experience with oral sex. Teen males are slightly higher than that number at 10 percent having had some sort of experience with oral sex.

It is also important to note that while trends in teen abstinence are on the climb, the number of teen pregnancies are also on the climb along with transmission of sexually transmitted diseases among teens. What is the deal with these numbers? Although it is difficult to pinpoint the correlation, many researchers attribute abstinence only education with not providing enough information to the teens who do have sex, how to do so safely. There could also be many reasons as to why more and more teens are practicing teen abstinence.

The most effective form of abstinence-only education is to focus more on the pros and cons of having sex as a teen. The program teaches teens that in many cases the cons of having sex during their teen years often outweigh the pro side of the idea of having sex young. Researchers found this to be the best way to encourage teen abstinence rather than focusing on preaching about waiting or disparage condom use. Many teachers, parents and researchers are calling for a more in-depth curriculum when it comes to teen abstinence. The most effective methods of delaying teen sex often including a blend of the overall message including information about safe sex, the risks, the cons of having teen sex as well as abstinence part of the educational method.

Even though the numbers of teen abstinence is growing, parents should continue to talk to their teens about how to practice safe sex, the importance of condom and birth control use as well as the likelihood of being able to contract some types of sexual transmitted diseases without having direct intercourse. Knowing how to protect themselves against unwanted sexual contact is also an important part of the sex education parents should discuss with their teens.